The Independent Journalists’ Association of Vojvodina (IJAV) informs the public that, in the night between November 23 and 24, unknown perpetrators wrote graffiti of hatred and national intolerance on the entrance to the building where the editor-in-chief of the Vojvodina Investigative and Analytical Centre VOICE and programme director of IJAV Dinko Gruhonjić and his family live. The VOICE portal is published by IJAV.

The graffiti written on the entrance to the building read, “Ustaša scum, this is neither your city, nor your country” and “You stink like a stable boy”, and were accompanied by a Celtic cross and swastika, which represent Nazi symbols, as well as another message, “ Ratko Mladić Serbian hero”. This act directly jeopardises the safety of Dinko Gruhonjić and his family, because it marks his as a legitimate target.

We would like to draw your attention to the fact that this act of vandalism followed the publishment of a text on the VOICE portal,”Novi Sad – nacionalšovinistička palanka koja slavi genocid?” which analysed the problematic content of the graffiti appearing in Novi Sad, which is why we believe that apart from being a threat to the safety of Dinko Gruhonjić, this act is also an attack on media freedom and freedom of expression.

IJAV has reported the incident to the competent public prosecutor’s office and police. We expect the perpetrators of this dangerous criminal act to be found, arrested and brought to justice. 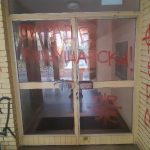 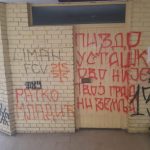 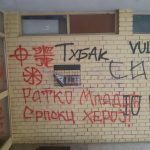